If you know what haiku is, you’re halfway there! Haiga is the combination of one haiku and an image, traditionally an ink painting, though other media (including photography) are popular and acceptable today. The two elements of haiga are complementary; one needs the other to get the full effect. The image is not illustrative, nor is the haiku a caption. For instance, if a haiku or senryu is about children playing with autumn leaves, a good haiga will not  depict those children playing in a pile of leaves. It might depict leaves, children, an autumn bird, or trees, but not the exact subject of the haiku. However, overlap is not forbidden. A haiku about a crane calling across the marsh may be paired with a painting of a crane, for instance. Again, the two items should be complementary, but not redundant.

I submitted these to a haiga contest in mid-to-late September. Judging was in late October, so I decided to wait to post these after the contest finished. The top haiga is an example of what I called overlapping just now. 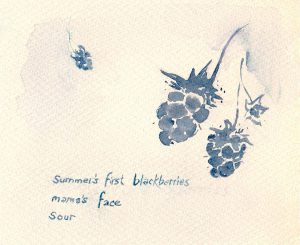 This was painted in watercolor. Though Japanese ink paintings are primarily grayscale, I love working with color, so I chose a dark blue-violet pigment that could echo the light and dark values of traditional works. I also kept the painting fairly simple—closer to a silhouette than a rendering—to echo the simplicity of the senryu. 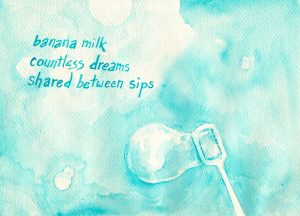 This one is also a monochromatic watercolor haiga. Although this senryu has nothing to do with blowing bubbles, their union instantly appealed to me and demanded to be expressed. Both dreams and bubbles have beautiful, ephemeral qualities. Moreover, in earlier versions of the senryu, I had specified “summer dreams”; though “summer” no longer appears, I still wished to convey the bliss that I associated with that in this haiga. Both the image of blowing bubbles and the use of a bright blue pigment satisfied that wish. (This one is the first haiga I created.)

If you’d like a refresher on haiku, these two posts from 2014 have short sections about the elements of haiku. In the 2nd one, look for the third header (“Haiku-coo for Cocoa Puffs”): 4th (update) of July and August Advancements.

On another note, last weekend, I attended another artist alley at an anime convention. Watch your inbox for a post!