As many of you know, this year I’ve had the opportunity to try my hand at new creative activities: making haiga, painting glassware, and restoring (or touching up, as it were) old paintings, to name a few. Now I’ve another one to add to the list: painting shells!

I took a similar approach to painting shells as I did to painting glass, which can be summed up in three steps:

All the shells pictured below were either off-white or yellowish before they met paintbrushes. More often than not, I had to put a little extra paint on the brush to reach into all the ridges and holes. Adding a couple drops of water to the paint already on the brush worked, too–the principle being to make the paint less viscous so it flows more easily into the gaps. The color, of course, was a bit less opaque. At first I thought solid paint would look the best–that is, applying a thick enough layer so that any colors and patterns naturally on the surface of the shell could not be seen at all. But also I found that a slight transparency looked pretty cool, better, in fact on some of the shells. Now I think it just depends on the shell (or whatever I’m painting on the shell). 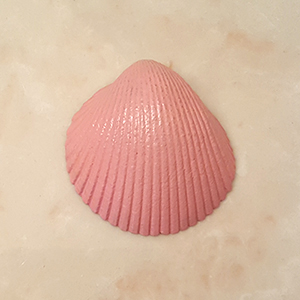 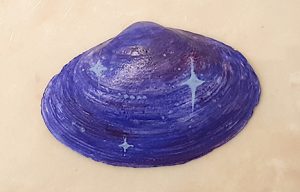 And then some fun that requires an explanation. There’s a manga & anime series called Fullmetal Alchemist that was released (in America) when I was in high school, and some friends and I got pretty into it. It’s still an immensely popular series. FMA follows two alchemist brothers, Edward and Alphonse Elric. Ed, the main character, wears a red jacket with a black symbol on the back. Al, his younger brother, is, frankly, a giant suit of arm wearing a pink half-length apron. (His body vanished in a disastrous experiment; Ed tethered Al’s soul to the armor so he wouldn’t disappear entirely. My experiment in painting shells was more successful and far less hazardous.) They spend most of the story searching for a way to reconstitute Al’s body, getting tangled in military/international affairs, and uncovering deep, dark secrets and unethical science experiments.

I now present to you Fullmetal Shellchemist. 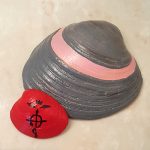 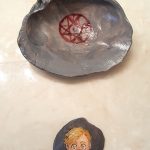 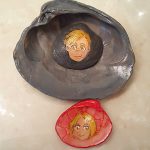 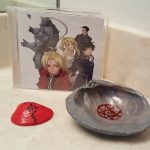 The red shell is the Ed shell. The exterior mimics his red jacket; flip it over to see his face. Al gets 2 shells: the big clam representing the suit of armor and a smaller one with his portrait. The pink stripe on the exterior represents the apron. Flip over the armor shell to see the tethering seal and the portrait shell underneath. Click any thumbnail to enlarge. Maybe I’ll paint some shells blue for the military characters. (They wear blue uniforms.)

The results of this experiment are conclusive: I will paint shells again.