The painting shared in my previous post is finished. It’s called “Bubblegum Pop,” which is a style of music as well as what occurs when someone blows too big a bubble. (As usual, click the thumbnail to enlarge.) I may paint another version down the road, one that’s a little more… spontaneous? Brighter? Fresher? The right word will come. Or maybe I’ll do a drawing; I thought of using my Prismacolor markers, but they’re still in Florida. (I couldn’t pack all my art supplies in the car and still have room for an art show.) 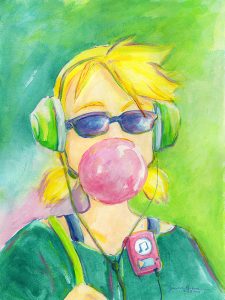 I’m adjusting to my new studio space (aka the card table in the corner). This week, the painting table will become the proverbial drawing board as I set up for the next project–once again resuming John Churchmouse illustrations. (Poor mousie–he’s been on and off the drawing board and the writing desk umpteen times since the idea came to me in 2011. But his day will come! This could be the year!) 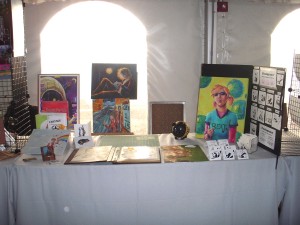 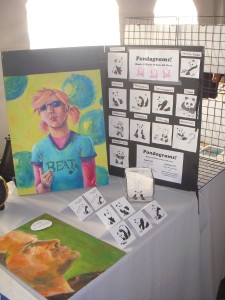