It’s been a while, but I have good news! It is okay to purchase the Kindle edition of Racing Pajamas on Amazon. I discovered that my Kindle Direct Publishing account, through which the RP eBook is available, is actually (and fortunately) a separate entity from my erstwhile Seller Account. I am grateful to have learned this (but it would have been extremely helpful if someone from the support team had told me that on the phone or had responded to my emails in the first place).

As mentioned in my post 2 months ago, the paperback edition of Racing Pajamas, as well as of Cartage, will not be available on Amazon. If you or someone you know would like to purchase either book, please contact me directly.

UPDATE, Fall 2017: This issue has been resolved: it IS okay to purchase the Kindle edition of  Racing Pajamas.

Please do not purchase Racing Pajamas (Kindle Edition) from Amazon.

For some time I have made print editions of Racing Pajamas and Cartage, as well as a Kindle Edition of Racing Pajamas, available for purchase on Amazon.com. I had deactivated the listing for the print editions while I moved, but not the Kindle RP because the payment and delivery was entirely digital. Yesterday, I realized I hadn’t reactivated them. When I went to do that, I discovered that I am now “not authorized” to access my own account. I called Amazon today and learned that my Amazon seller account had been permanently closed — without notification — due to “dormancy.” (Research informed me that I am not the only seller to experience this–if you sell on Amazon, you may wish to check your account. This is different from a buyer account.)

However, the RP eBook is still active on Amazon. (I tested this today and, yes, it can still be purchased.) Please do not buy RP from Amazon since I no longer have any guarantee that the funds will come to me. I have emailed Amazon support to have the item removed entirely from the database.

I am grateful to those of you who share my books and art with others by word of mouth. As you continue to share, please take note that none my works are (or will be) available on Amazon any more. If you meet anyone interested in purchasing any of my books, Pandagrams, & other items, please have them contact me directly. I will also resume thinking about how I might monetize my website so that people could order directly online. 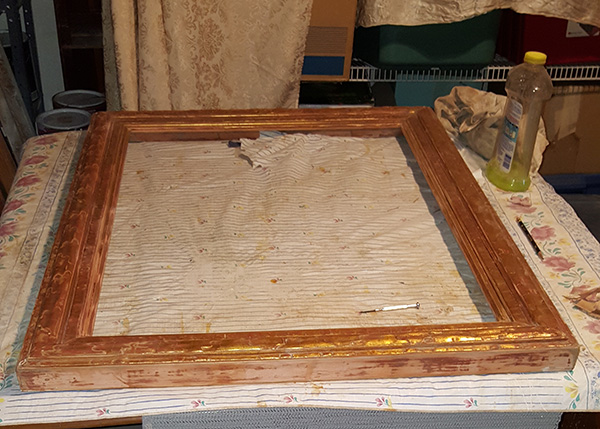 Remember this? It was pretty green–or not so pretty green–last time you saw it. I had to sand off a lot more of the coating than I had hoped would be necessary, but it was important to get as much gunk off as possible. I will have to research whether I need to apply a primer or lacquer to the exposed wood, or if the metallic elements in gold-leaf paint are sufficient protection. 1 frame down (the worst of the lot), 4 to go!

In other news, I got proof copies of Cartage (graphic short story) from the printer last week. I have a few final edits to make, and then the print run begins. Stay tuned for celebratory news in February!

Fortunately, you do not have to have a Kindle to read e-RP! Amazon created an application for computers, phones, etc., to view Kindle files. Visit Amazon’s Kindle Direct Publishing page, scroll to “Kindle for PC/Mac” at the bottom & download the necessary file. It’s free! (And also accessible via the e-RP sale page.) Since I don’t have a Kindle (just a Kindle previewer), I’d love feedback about the real Kindle display in case I need to fix something.

At this time (and largely due to technical complications), there are no plans to sell e-RP through other venues, but I expect to utilize multiple channels for future books.

I’ve also revised my preview of Cartage (printed for the anime convention) for beta-testing/potential audience-building on the web. You can download the PDF on the Coming Soon page. It’s also on Lulu.com to (hopefully) reach a wider, unknown audience. Bread upon the waters.

Further fruitage from KawaKon: Hard to believe that was a month ago! I’m doing new digital character artwork for a visual novel called Detective Butler, created by an independent game developer, Goldbar Games. The new VN (creation in progress) will take place four years after the initial VN on the site (also free). Some credit for my new adventure goes to good ol’ Principia connections–the team lead of GG is a friend of a guy I attended Upper School with. Cue Principia’s unofficial alma mater. I’m sure you all know it. (Hint: It’s sung by dozens of dancing dolls in Disney World.)

It’s a small world after all… 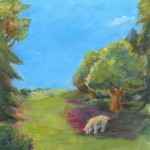 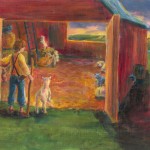