Here’s a detailed update of the 3-day anime convention (Derpycon) I attended a week and a half ago. As said last time, business-wise, the convention went astoundingly well, better than I had imagined. Even though there were slow times, I sold enough on the first night to pay off the table! This was the first time I “made table” on the first day. Pleasantly surprised & very grateful. Also, the convention staff I interacted with was very helpful; they interacted with the artists more than the other 2 cons I’ve done.

At some anime conventions, the artist alley (for independent artists & crafters) and the vendor/dealers room (for licensed merchandise, eg. official Pikachu stuffed animals, anime soundtracks) are located in the same room; at other conventions, the artists & dealers are separate. Dealers & artists were separate at Derpycon, and artists were further separated into room space & hall space. The waitlisted space I filled was a hall space–the last table at the far end. Three tables between the rest of the artist mall and my table were empty (no-shows), so that evening, members of the con staff invited me to move closer to everyone else Saturday. Several people (con staff, other artists, & con-goers alike) came over and commented about my solitude, whether it would affect sales, etc. I don’t think it made a difference since, as said, I made table first night; as for all the people who came over to ask “Is it lonely over here?” — no, it wasn’t since they came over! It was also a good opportunity to make Hobbit references (mainly the Lonely Mountain). 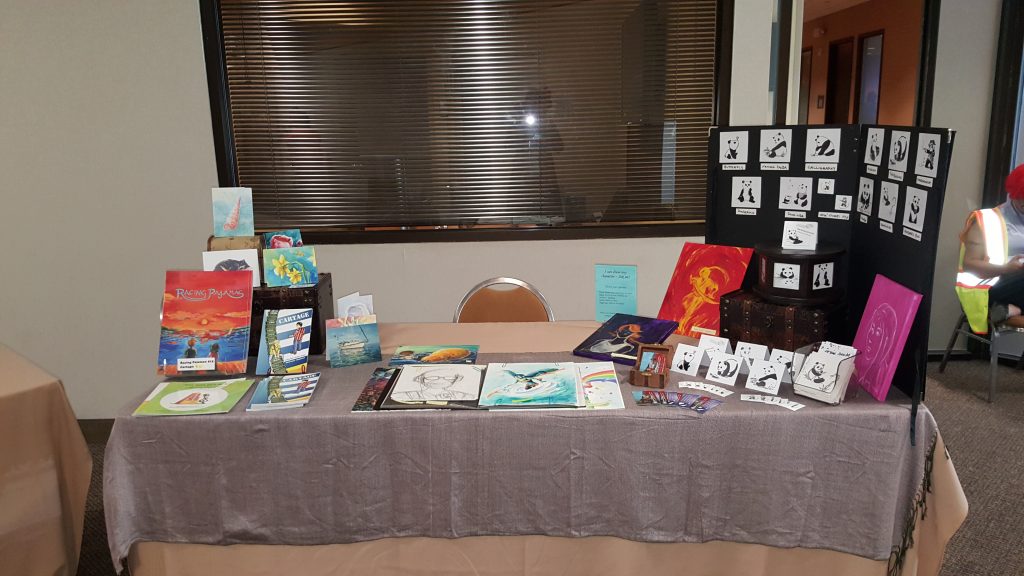 Here is the Lonely Mountain, a.k.a. my booth.

Saturday morning, just as I was beginning to set up, the head of artist alley asked whether I would like to move into the artist alley proper (from the mall to the room). Free upgrade! There were some no-shows in the room, so 2 other booths and I moved in. From the ends of the earth to prime real estate–not bad! The main benefit is that the room, unlike the hall, is locked at night, so people can leave their booths set up overnight; they don’t have to take down & set up every day.

I adjusted commission prices (for drawings done for people at the convention) for Derpycon to see whether lower prices would increase the number of commissions requested, and wow! They did, by a lot, but I think the prices were too low. Next time I’ll try a happy medium. 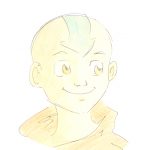 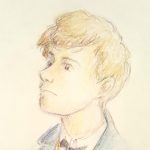 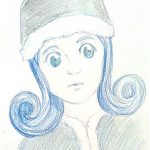 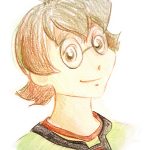 Here are some character drawings I did during the event.

One of the most enjoyable aspects of hosting a booth at anime conventions (along with seeing the creative cosplay/costumes) is interacting with the people who connect with the art I have to share. In particular, there was a dad with three girls (and a son who wasn’t able to attend, but they purchased art for him); the dad didn’t know much about anime, but he was very supportive of the girls’ interests. He even dressed up! He works in a hotel kitchen, so he wore his cook clothes and said he was from Food Wars!, a fairly recent, popular show about (you guessed it) cooking. The family came by several times and were good patrons. There was another father with his daughter and her friend; the girls each commissioned a drawing and were incredibly excited to receive them! The dad then took a photo of me and the girls holding their drawings. There was also a young guy (probably in high school or college) who had come to buy something special to hang in his room, probably a big poster. Out of curiosity, he perused some of my art, turned to the last painting, and then he was totally engrossed! For several minutes, he just looked and kept looking at the painting. And that was it! Sold! He told me he wasn’t really into “art” art (which I take to mean anything resembling traditional art), but this was the first time he had ever looked at a painting for four minutes straight. (It was a painting I had painted for an English project in high school & hadn’t previously brought to any conventions–only decided to bring it Thursday night before the con.) He really loved it. It was very special to see someone connect so strongly and quickly with art.

Needless to say, it was a good experience. I’m glad I had the opportunity. Since my posts aren’t usually this long, I’ll also say “thank you” for reading!

As promised, here is a selection of drawings and photographs from the anime convention. First, a peek behind the scenes at my booth. You can see how I secretly stored my drawing supplies to keep the display tidy. I also brought a clipboard so I could draw on my lap. It proved useful. 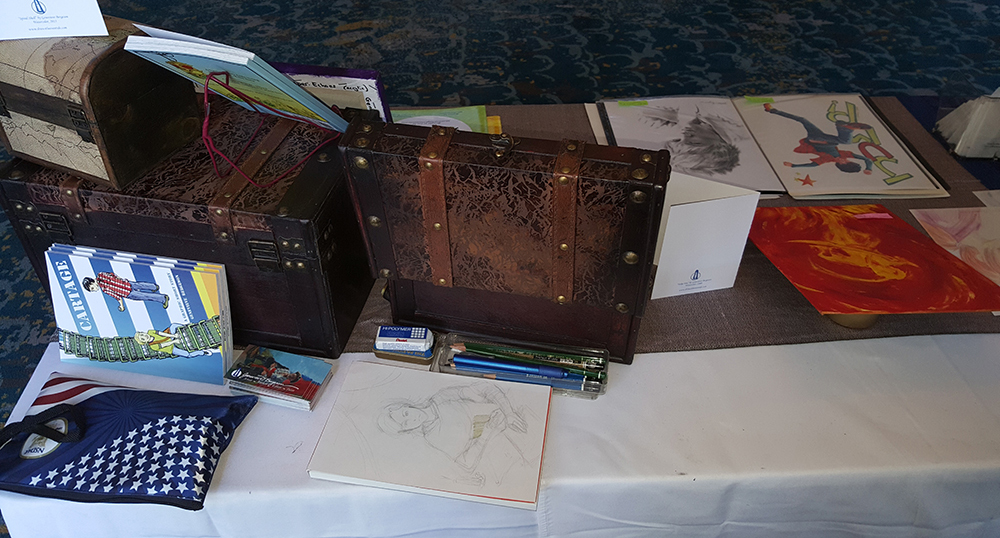 Now for some drawings! 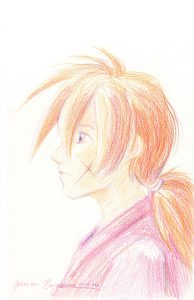 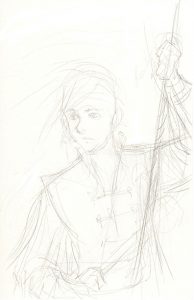 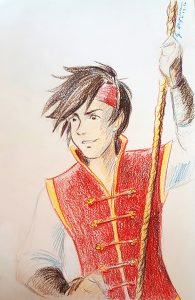 Left to right: Himura Kenshin (from Rurouni Kenshin), sailor sketch, sailor in color. I drew the sailor as a thank-you to another artist at the convention for a drawing he gave me. I changed the expression for the final drawing–determined and ready for adventure! 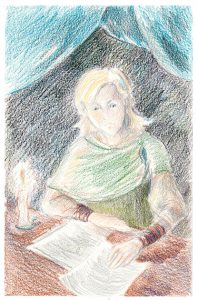 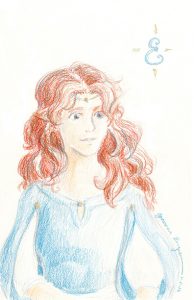 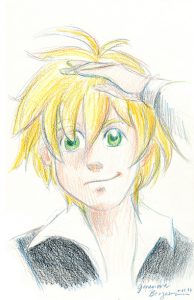 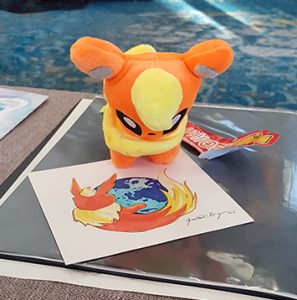 This is my favorite photograph from the convention. The drawing is a Pokémon spoof on Mozilla Firefox. The plush toy and the Pokémon in the drawing are both Flareon, a fire-dog creature. I talked with the plushie owner a lot over the weekend. (She stopped by my booth every day). On the last day, she had the little Flareon with her. Picture-perfect.

About a week and a half ago, I attended what is both my 2nd and 3rd anime convention artist’s alley. 2nd because it is the second different convention I’ve attended (the other one being Kawa Kon) and 3rd because it is my third time hosting a booth.

No matter what number, I get ideas each time: ideas for art projects, art supplies to try, web & print resources, display—all sorts of things. I also learned how a button press works.

To spruce up my booth, some new items were added. I used a scarf and a table cloth on top of the white already provided by the hotel. (Both textiles are from India—gifts college friends brought back from an abroad program—and I am glad for these beautiful items to come out of storage.) The new chests double as display bins by day and storage bins by night. 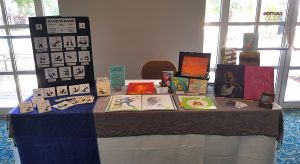 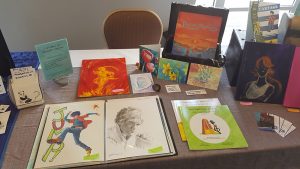 The table set-up was a bit different than I expected. Instead of being lined up right next to each other, the tables were spaced a few feet apart, leaving the sides open for display. I put Pandagram stickers and sticky tack to (hopefully) good use. I’ll have to think more about how to utilize the short sides of the booth in the future. 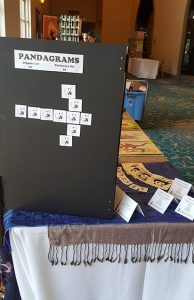 This convention seemed larger than Kawa Kon, but still comparable. Business was slower than expected, but I am grateful the numbers came out okay in the end. I am also grateful that I got to know some new people over the course of the weekend. Talking with other artists (musicians, too!) and convention guests is fun, especially (as I have said before) encouraging other artists and writers.

To add to the fun, I drew a lot during the event, too. Between commissions and slow periods, there were many opportunities to draw. Seeing the cosplay is also great fun. Costumes are a wonderful outlet for creativity. More on these creative endeavors later, I think. I’ll post pictures (definitely drawings, possibly photos) some time after the holiday.

Until next time, smooth sailing, and blessed Thanksgiving!