In the past couple months, new Pandagram characters have been spotted intermittently around central Jersey and eastern Pennsylvania (at conventions). Now it’s time for their website debut!

But first an update on conventions. Two weekends ago, I tabled at Thy Geekdom Con — gaming, anime, comics, and more in Oaks, PA, on the other side of Valley Forge. Business-wise there isn’t much of interest to report; it was very slow and expensive (tolls as well as table fee), and it took significantly longer to drive to the expo center and back than mapping programs predicted. For those reasons I don’t expect to do a con in that area again. I’ll stick to visiting Valley Forge once in a while. (By the way, there is a carillon tower there! I met the carillonneur, Doug, this summer while I hosted Princeton University’s carillon summer series.)

This Friday through Sunday I’ll table at PhilCon, the world’s first and longest-running conference on science fiction & fantasy and hosted by the Philadelphia Science Fiction Society. This one should actually take an hour to get there as predicted. I will be grateful if it does–and very grateful if business is better. Now, onto the pandas!

They will be in the internationally themed third set of Pandagram cards. First, we have Monsieur Panda avec le pain (“with bread” in French). Second is Japanda, who is making onigiri (Japanese rice balls). Then there is Pandzer (Germany) and Peter Panda (England). 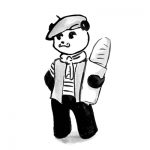 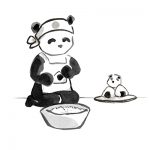 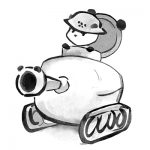 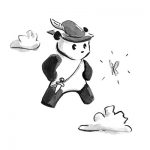 The fifth Pandagram in the set will represent China: Pangrams. The panda will be completing a tangram puzzle. Pandagrams’ reputation as black and white and fun/pun all over shall surely be upheld.