Last time, I wrote about starting to paint the fruit by blocking in the basic shapes. This time, you see more development and details. 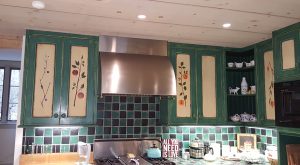 After starting my persimmons & plums, I worked on a pair of pear panels. (One of the pear panels portrays a pair of pairs, and the other a pared pear. 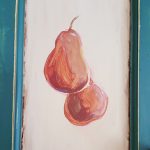 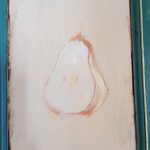 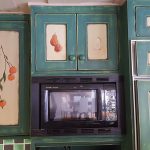 I promise that not all my panels began with the letter p–but it came close. One panel has a sprig of lavender, but it used to be a pussy willow. I also painted the 2 fridge panels, which has roses and grapes. It might be argued that they are purple grapes and pink roses, but at least the plants themselves don’t start with p. (But “plant” does — alors!)

The president’s wife specially requested that we paint some “surprises”–little animals and such, which I did. First two little birds among the plum branches.

Then I painted three paper kite butterflies on the persimmon panel. As you will see in the next & final post in this series, I incorporated the same species of butterfly and another bird into the refrigerator panels to help unify the kitchen. 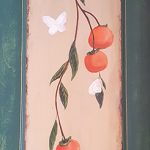 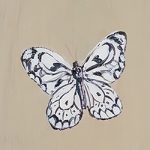 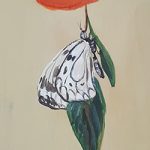 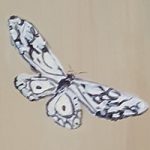 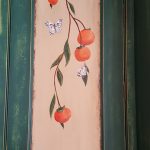