This is Genevieve, reporting back from Kawa Kon 2016! After last year’s anime convention, I had a lot of ideas and improvements to implement. Alliteration almost always intended. Knowing what to expect, I felt more prepared this year. For example,

1. Books: Last year, I was racing to finish a book before the con (and didn’t–too many things to revise); this year, I finished (Cartage.)

2. Display: Last year, I wasn’t certain how I wanted to display anything; this year, I already had an idea–and new, laminated signage. No big paintings or anything behind me this time; the vendor space was too small for that.

3. Commissions: This was the biggest surprise last year; I hadn’t known attendees often request commissions at conventions, so I was pleasantly surprised when asked to do one. The bigger surprise: these are generally same-day commissions–a kid makes a request and picks up the completed art later. I hadn’t brought any drawing supplies with me, and I didn’t know who the character was, so I expected to do it overnight. (Fortunately, she was a multi-day con attendee.) As it happened, the girl was worried about having enough money to pay me at the con, so we arranged for a mail exchange afterward: she sent me a check; I sent her a drawing.

This year, I was ready! I brought drawing supplies and had upgraded to a snark (smart) phone so I could look up characters. Below: my one commission: Fenris (left) and Cole from Dragon Age. 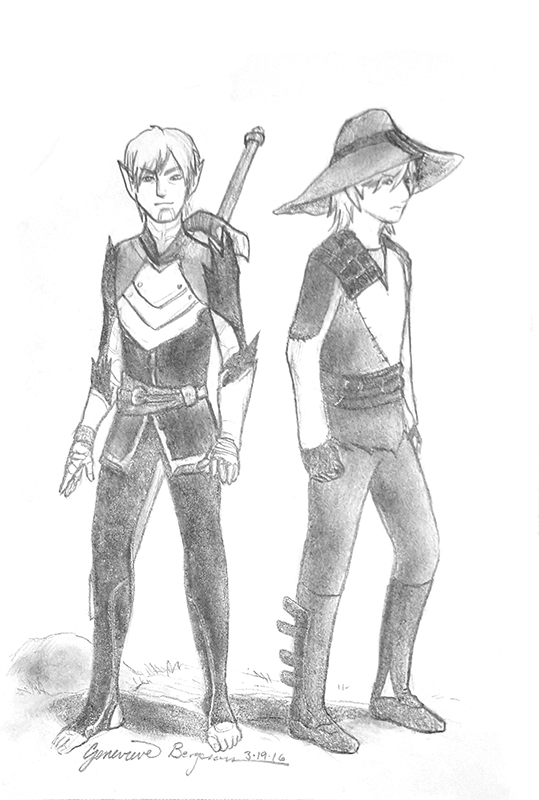 4. Cosplay (Costumes): Like many people, I enjoy dressing up as characters for these events. Last year, I wore my May outfit (black & orange pirate garb from Guilty Gear) on Saturday, the longest day, and spent way too much time pushing my hat back up my forehead. This year, I wore a different costume without a hat (Yato from Noragami), and my pants–which I had never worn before–were super comfortable!

I am very grateful for increased activity this year. To compare, last year on Friday (the first day), I sold one 3″ Pandagram painting for $2. That was it. I was so grateful! This year on day one, I sold almost enough to pay off the table fee. Saturday and Sunday saw even more sales. (Well, only 50 cents more on Sunday, but Saturday was fabulous!) It was much busier for me, partly because of the vendor space: smaller space, fewer artists, more attention. Also, I was placed near an entrance, rather than a far corner. Some people remembered me from last year, too. 1 individual said he had seen Pandagrams last year but hadn’t any money then. (I’m also glad for continuing connections from last year; in fact, one of the couples I talked with several times last year had a booth across from mine.)

After the dealer’s room closed, I had the opportunity to attend evening events. A group called Lonely Mountain performed; they do bluegrassy/mountain music, and most of their works set J. R. R. Tolkien’s poetry to original music. I also attended the cosplay masquerade; it’s fun and inspiring to see people’s costumes/handiwork.

All in all, Kawa Kon 2016 was great! If you have questions about anything I mentioned (or didn’t), please comment below so everyone can read my response!